Canada’s Ministers of Natural Resources and International Trade, as well as the minister for the Federal Economic Development Initiative for North Ontario unveiled Canada’s Strategy for the Extractive Sector Tuesday during the Mining Association of Canada’s (MAC) annual Mining Day on the Hill luncheon.

Key elements of the Extractive Sector Strategy include: leveraging trade and investment agreements to provide the certainty and the predictability necessary for Canadian mining and energy companies to invest and operate abroad; transforming business opportunities into business successes through ‘economic diplomacy’ and on-the-ground support; advocating for improved governance and regulatory frameworks abroad and sharing best practices.

Other elements in the strategy include: increasing training abroad to support the extractive sector; and expanding stakeholders’ linkages to ensure the Canadian government is responsive to the needs of mining and oil and gas sectors, including developing annual market access plans for priority markets.

The Harper Government also announced that it will work to “ensure the long-term success of Canada’s mining and oil and gas sectors by keeping taxation low, eliminating red tape, and modernizing the regulatory regime for major projects.” 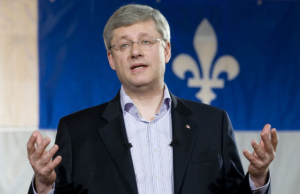 “These companies, many of which are small- and medium-sized enterprises, have built a world-renowned reputation based on Canadian know-how in exploration, engineering, extraction, development and financial management,” said the agency. “When extractive resources are developed and managed in an economically, social and environmentally responsible manner, job creation is facilitated and sustainable economic growth can occur in countries and communities where they are operating.”

With interests in more than 8,000 properties, both domestically and in over 100 countries, Canadian mining and mineral exploration companies account for almost half of global activities in the mining sector, according to Natural Resources Canada. From 2008-2013, 39% of global mining equity and more than 70% of all global mining equity financings were handled through the TSX and the TSX Venture Exchange—more than through any other stock exchange in the world, NRC noted.

The nation’s extractive sector, which also includes oil and gas as well as mining companies, generated C$174 billion in exports for Canada in 2013 for 39% of the nation’s total exports. These industries account for 13% of GDP and more than 380,000 jobs in the country. Nearly 3,200 suppliers of equipment and services support the Canadian mining industry.

Canadian mining companies paid C$18.9 billion in the form of taxation and royalties to Canadian federal and provincial governments from 2008 to 2012, averaging C$4 billion annually.

“The Harper Government has negotiated and concluded free trade and foreign investment protection agreements at an unprecedented rate over the past eight years, positioning Canada’s globally-leading mining sector for success. The new strategy will add distinction to Canada’s mining brand and should send a clear signal to other mining countries to take note,” said Mining Association of Canada (MAC) CEO Pierre Gratton in a news release Tuesday.

The 2014 enhanced CSR strategy is aimed at strengthening “Canada’s leadership and earned reputation for excellence in CSR,” said the International Trade Ministry. “It also demonstrates the Government of Canada’s commitment to ensuring Canadian companies continue to exhibit the highest CSR standards and best practices while operating abroad.” 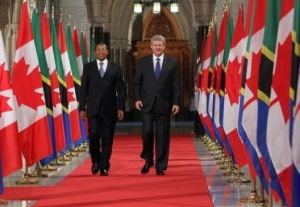 “The Government of Canada is setting a high bar for corporate responsibility performance—one that our members embrace,” said Gratton. “The new strategy will add distinction to Canada’s mining brand and should send a clear signal to other mining countries to take note.”

Rodney Thomas, president of the Prospectors and Developers Association of Canada, observed, “The Government of Canada has an important role to play in supporting both the global competitiveness of the Canadian mineral industry and its ability to contribute to the sustainable development of the societies in which it operates. The Prospectors and Developers Association of Canada (PDAC) supports the steps taken to promote responsible mineral development through this strategy.”

Among the CSR activities of Canadian Missions abroad are the first Base Metals Symposium in Cotê d’Ivoire this month and the Executive Program in CSR, Strategy and Management in April in Ghana.

In February, the Canadian Embassy in Peru launched the project, Promoting Competitiveness and Economic Diversification in Extractive Regions in the northern province of Trujillo, Peru. Co-funded by Barrick Gold, Antamina and Rio Tinto, the C$21-million projects aims to improve the economic and social conditions of people living in mining regions. It will support 3,000 family farms grouped in 30 cooperatives, mostly in the agriculture and forestry sectors. 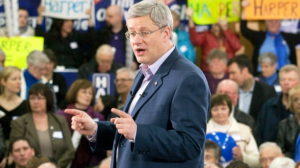 In a news release Tuesday, Gratton said, “Taken together, these two strategies send a welcome signal that Canada supports and promotes a strong and vibrant Canadian mining sector both at home and abroad. The Government of Canada is also setting a high bar for corporate responsibility performance, which our members embrace.”

Gratton noted that the Canadian mining industry has also supported the government’s practice of embedding dedicated trade commissioners into industry associations. “As mining is both a complex and global sector, MAC has seen the benefits of this program as it provides a platform for trade commissioners to learn more about our industry and align government efforts to further enhance Canada’s strength in mining overseas,” he said.

“When taken with the CSR strategy that sets expectations of companies to adhere to international standards regarding social and environmental practices and strengthens Canada’s international dispute resolution mechanisms such as the Extractive Sector CSR Counsellor and the OECD National Contact Point, Canada is well positioned as a global leader in the extractive sector,” the association said.

Comments Off on Bodybuilding Workout Routines For Mass Muscle Building