It’s a tough balance between watering enough to keep my yard from dying and watering too much, which creates a heaven for ‘shrooms. What’s worse is no matter how hard I work to pluck those little buggers out if my neighbor isn’t quite as diligent, they are sure to come back again.

Last night we had some (much needed) rain which seemed to be the trigger for some dormant mushrooms to raise their ugly heads. This morning the backyard was speckled with white domes, which caused me a minor bout of anger leading to quick depression. I hate pulling the things, but that is really your only option.

‘Shrooms are feisty, resilient little things for which we have no offense other than to bend over and pull them – hopefully before they have sent out their little spores to create thousands just like them. If you don’t get them early, all you are doing is pulling out the stump for cosmetic purposes. There is no nice little poison you can throw down to kill them and no special treatment to prevent them. Mushrooms rule the yard whenever they darn well feel like it. 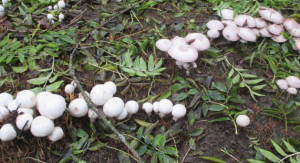 I know, I know, mushrooms do not feel and they are not calculating; but it sure feels like it sometimes. I’ll go weeks without one showing itself, and I feel like I have licked the problem; then, bam, just like that they are back with a vengeance. It may be due to that lack of diligence from my neighbor I mentioned; but whatever the reason, I feel like I am losing the battle.

All I know is I can’t give up. If I just let them grow what I see now will only be tenfold in a matter of weeks. So, I plug ahead each morning yanking out each one in hopes of making headway. At least my kids are not tossing them back for a mid-morning snack like one did several years ago. He learned via ipecac that was not something he wanted to repeat. But that’s a story for another day.